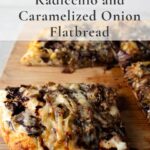 A chewy, thick crust flatbread pizza with creamy cheeses, sweet onions, and seasoned radicchio. And some notes on flavours in dough – because of yeast! 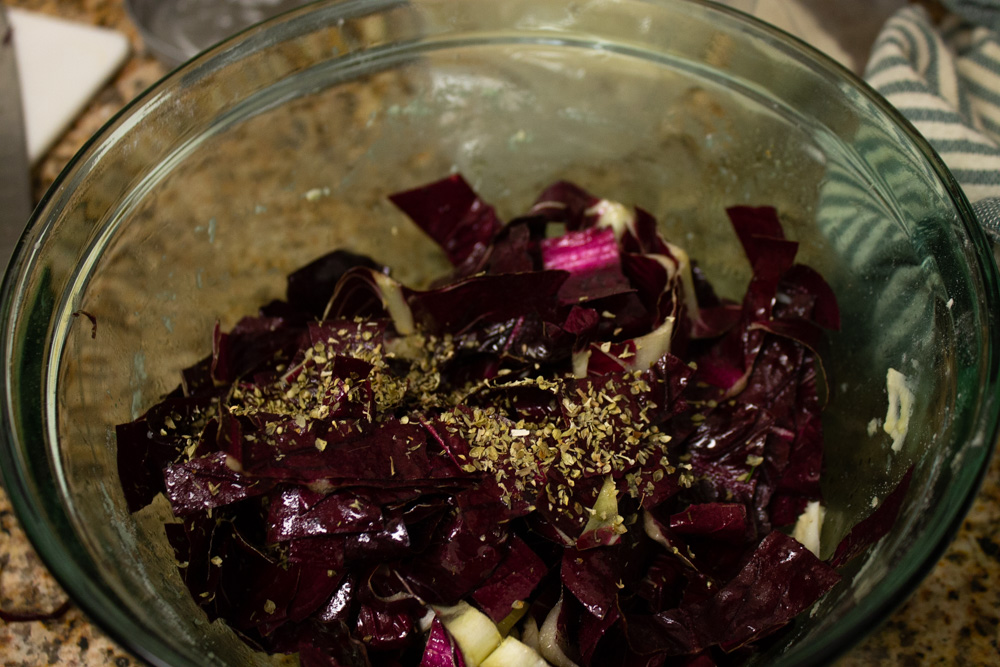 I have a love hate relationship with radicchio. I really enjoy eating it when I am out, but every time I try to cook with it, my dish becomes intolerably bitter. Recently I came across a recipe on SugarLoveSpices for a radicchio pizza and a recipe for a caramelized onion focaccia on The Candid Appetite and thought that the combination would be great. And for once, it was. The sweetness of the caramelized onions balances out the bitter of the radicchio with creamy cheeses to cut it further. Not bad for a “what am I going to do with that head of radicchio” existential question. 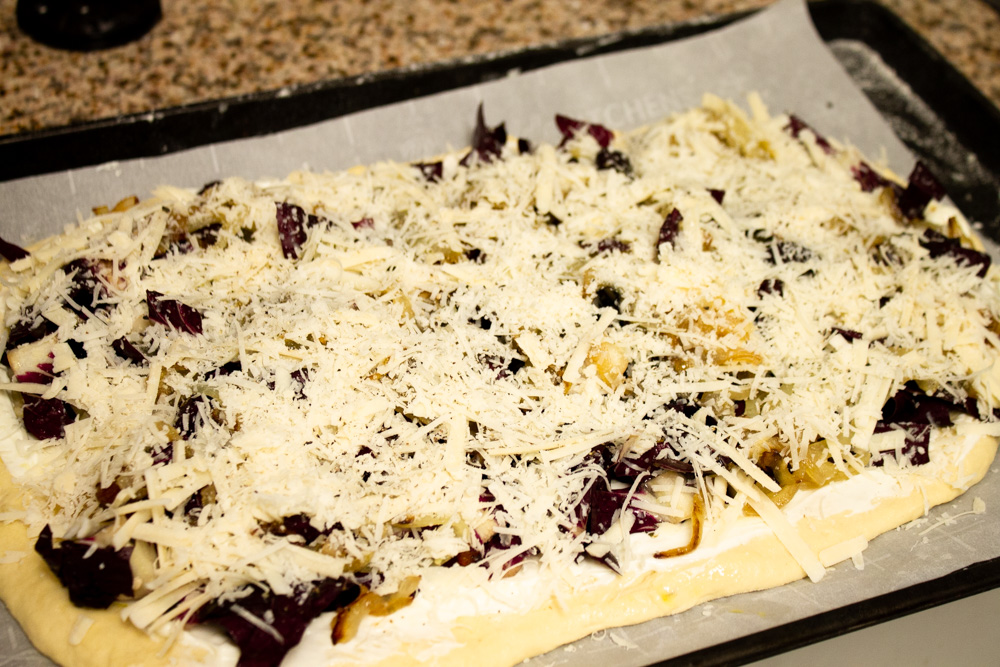 A Dash of Science

I have been working on an epic post about the science behind bread, but it keeps getting pushed off because there is just so much information. (Update: I’ve finally gotten to more on this subject – check out gluten formation, inhibiting gluten bonds, and the science of kneading). So I’ll try to tackle some of the pieces of bread science here and there, starting now. How about starting with yeast and flavor development since this recipe is basically a shortcut?

Yeast eats the carbohydrates (sugars) in, well anything – but in this case flour – and *ahem* excretes ethanol (booze!) and carbon dioxide (bubbles!). Among other things. The other byproducts are the things that add to flavor development which for simplicity we’ll call aromatics. Depending on the conditions the yeast are living in (availability of oxygen, temperature, chemical complexity of sugars available) the ratio of all these byproducts changes. Oh, and species of yeast, but that’s not something you have to worry about unless you are buying your yeast from a homebrewing company. 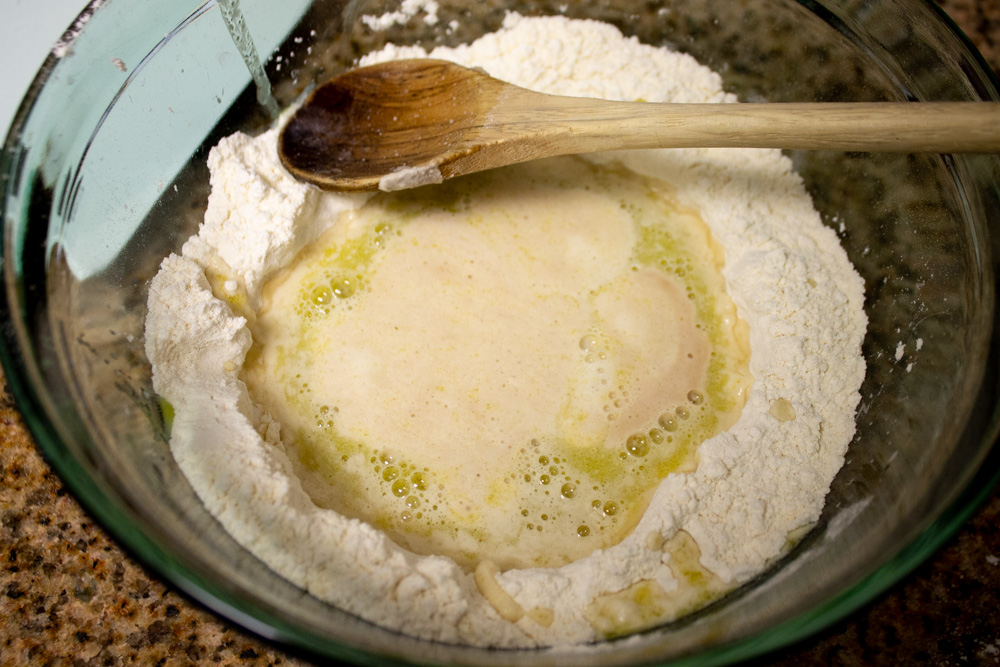 Temperature is the biggest variable one for our purposes in bread making (oxygen availability and yeast species are the more critical components when producing alcohol – see, I’m good at getting off track). Yeast need enough warmth to be active – i.e. eating and replicating. Too cold and they are dormant, too warm and they’re dead. The general range is about 60F-110F. But within that, the rate of replication increases with increased temperature. In biochemical terms, this means more CO2 – relating to the volume indicator in most recipes. But cold yeast are being conservative (to anthropomorphize them) and aren’t in a hurry to replicate as the temperature might go down into dormant conditions again soon. So their byproducts are more of the aromatics, which add flavor to your dough. But they take longer to produce the same amount of CO2, so longer until you are eating it. This is why making dough takes a lot longer on a cold day, but you’ll hear that cool, foggy weather makes for best bread.

The other thing that can help speed up the yeast is a simpler sugar source, at least at first. Since I aimed for a fast dough here, the addition of sugar contributes to both the speed of the rise and the overall flavor. The sugar is readily available (and dissolves in the water faster) while the flour is still getting hydrated. The yeast get a quick jolt of energy to start replicating so there are more of them to starting eating the flour. Many people use granulated sugar, but I wanted to cheat for a bit more flavor despite the short rise, so some brown sugar adds a bit extra. Of course you can get good flavor development by allowing the dough to rise slowly in a cool environment, but that means planning supper a day or more in advance, something I rarely do.

There are some many other aspects to this, like the kneading and gluten formation, or the addition of oil, but we’ll save those discussions for some other time (you can also check out the reaction for caramelizing onions). Better to just enjoy the flatbread now. 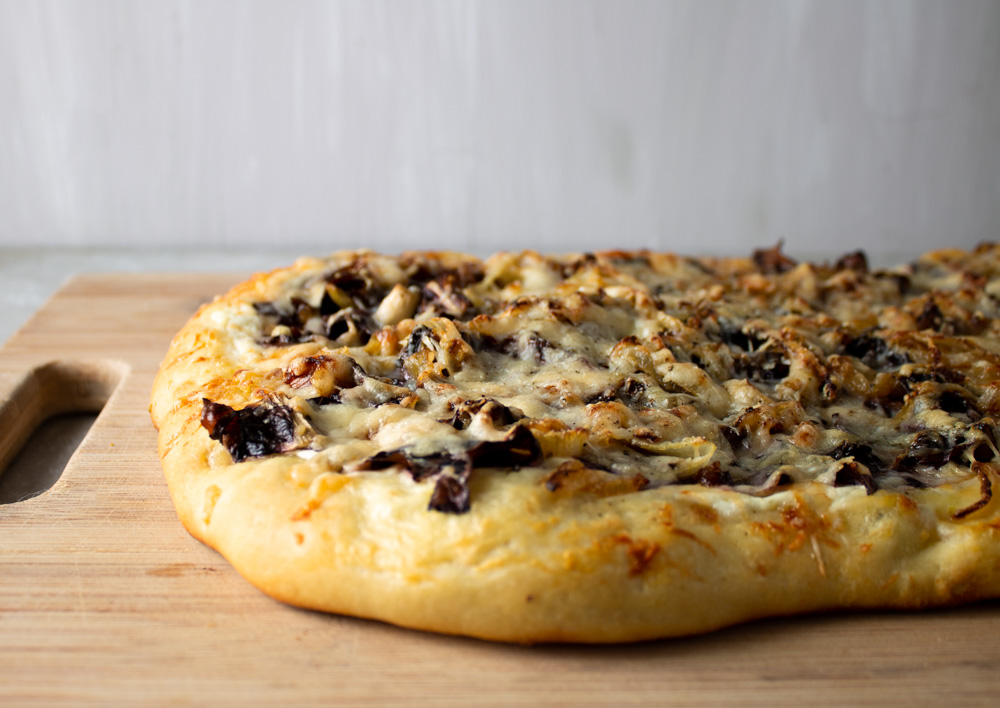 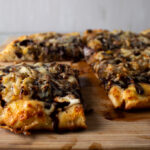 *You can make balsamic reduction by slowly heating balsamic vinegar in a sauce pan over med-low heat. Swirl regularly to prevent burning. Reduce by about half, until it just coats the back of a metal spoon. It will thicken further as it cools. *If you have a pizza stone and are comfortable using it, by all means use that for even better results.