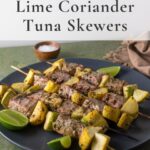 A tangy, earthy marinade made with crushed coriander seed and fresh lime juice and zest. This lime and coriander marinade is great on fish or chicken.

When I was younger, I didn’t like fish at all. I’ve slowly grown to eat a bit here and there, but certainly won’t seek it out the way some people will. I think the biggest difference for me now is in how it is prepared. A good (light) marinade or sauce, not over cooking, and well-seasoned, refreshing accompaniments make it all perfect. Which is of course where these lime coriander marinated tuna and summer squash skewers come in!

Last summer I used this marinade on chicken for a party, which was also delicious. But in the spirit of trying provide you with some recipe diversity, fish seemed like a good alternative (and it was). If you do use chicken, cut it into smaller pieces (closer to 1” cubes) as it is slower to cook and you don’t want to over cook the squash. 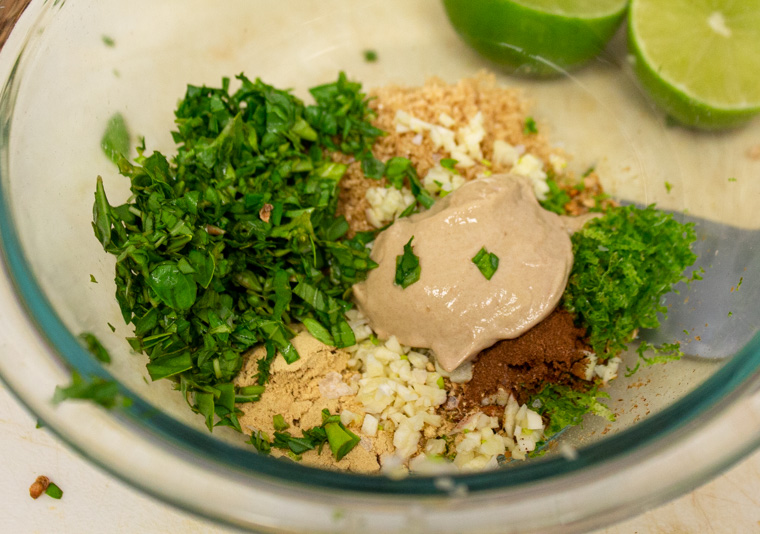 I recommend a minimum of a 1 hour marinade, but you can leave it for up to a day. At that point the lime juice will have actually started “cooking” the meat so you’ll see some opacity on the surface. This is the same principle as ceviche, denaturing the proteins with acid as a means of cooking. But unless you are using sushi grade fish, you still need to cook with this recipe.

I find this goes perfectly with a vegetable heavy starch based salad, like this sage pesto farro salad. Two doses of vegetables, plus a bit of protein and some flavourful carbohydrates is a great summer meal. It’s also great if your husband is a fitness nut who really needs some balanced meals. 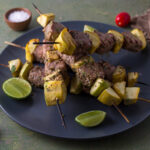 *I used ahi tuna. I’m sure this would be even better on yellowfin tuna. As noted above, this recipe also is very good with chicken, just cut the chicken cubes smaller.