The zucchini I planted just over 2 months ago is now taking over the garden. It is producing so much I can’t use it all and pawning it off on other people barely makes a dent. So, you will be seeing a lot of zucchini recipes in the next couple months. H hasn’t started to get sick of it yet, but I think we might be approaching that point fairly soon. Too bad for him. I figured a lightly sweetened zucchini bread was a good place to start.

A primary school teacher used to bring us zucchini bread all the time. As 7 year-old’s, we thought it a very odd offering, but we sort of ate it. Most would have preferred banana bread (not a personal preference) at the time, but I bet if you were to offer any of us a well made zucchini bread today, we would eat it gladly, the more zucchini the better. 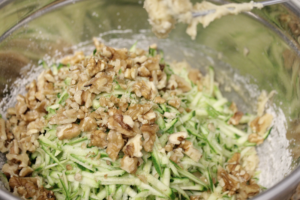 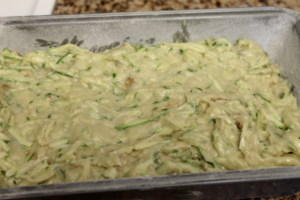 I embraced that in this recipe (also I have to use up a lot of zucchini). Based on Tartine’s Zucchini and Orange Marmalade Tea Cake, I increased the zucchini and flour slightly to compensate for the extra water in the zucchini, used butter rather than vegetable oil for a richer flavor, and used nutmeg and ginger instead of cinnamon to brighten the flavor a bit. It is more like a dense cake than a bread, tending towards crumbling, but is definitely firm enough to hold up to a variety of preparations. 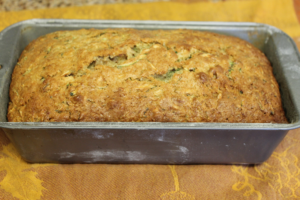 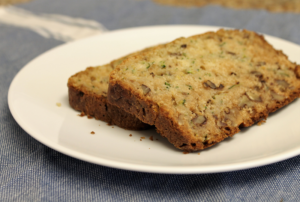 Zucchini bread is so versatile, serve it at room temperature with a cup of tea, or toasted with a slathering of butter, and of course just warm with a dollop of cream cheese frosting. A restaurant I worked for in Seattle – The Whale Wins – had a very popular butter roasted zucchini bread drenched in powdered sugar. H and I grilled some on the outdoor fireplace with some melted butter. A very satisfying after supper treat. 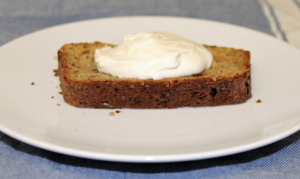 As a final note, I will be working very hard from here on out to include the metric measures for all the ingredients. I may slip up here and there, but I am working on it. Measuring this multiple ways just adds so much more time to cooking! 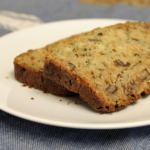