A few months ago I went to Blind Tiger in Oakland with a friend. One of the items we tried was a trio of pickled deviled eggs (beet ginger, turmeric garlic, black tea shoyu). We both really liked the beet ginger, and well, all of them, so I wanted to create something similar. The garlic was a little much with the turmeric to eat several of, but you can’t really go wrong with the combination of turmeric and ginger so I started from there. 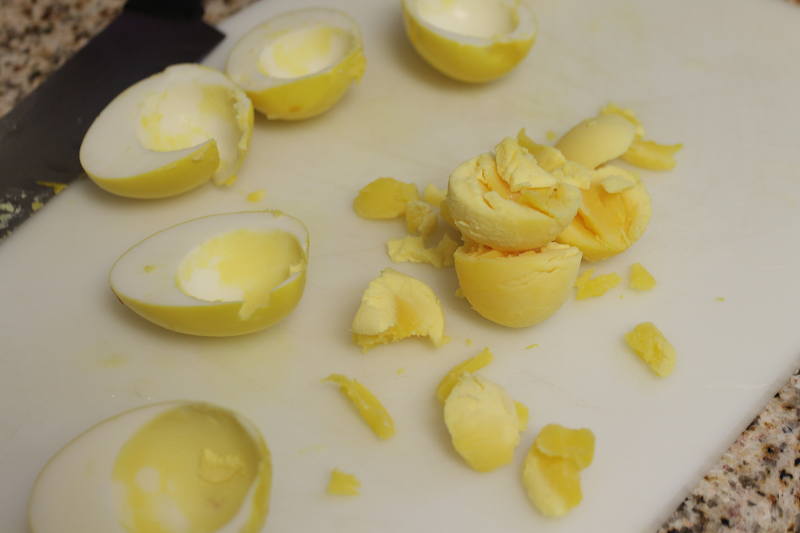 I ended up creating a giant platter of them for a party held recently, and they were some of the first foods to run out. And I had people telling me how much they liked them days later, so I guess that is a pretty good indicator of a successful recipe. 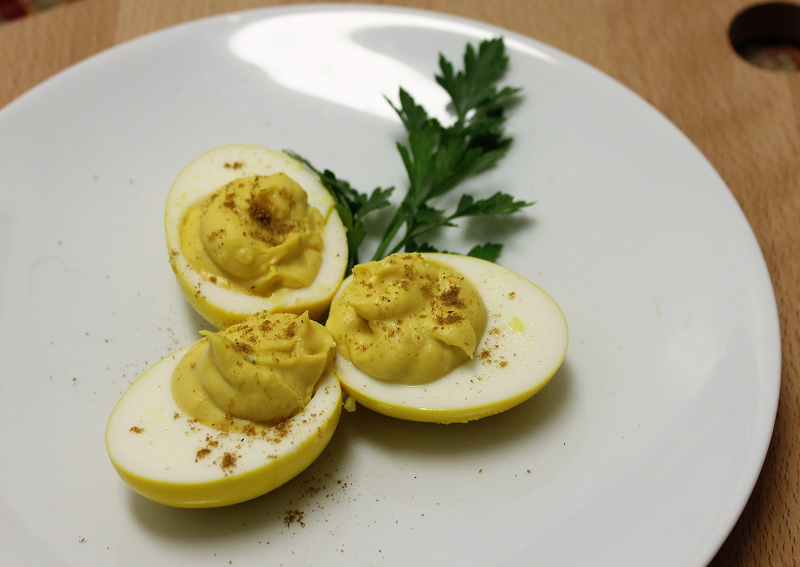 The recipe here is for 6 eggs, which is pretty much the minimum you can make just because of the difficultly of dealing with small volumes. But of course the recipe is very easily scalable, and why would you not just make more when you are going to all that work in the first place. Also, they tend to disappear when you take them to a party. Better to make lots. (And you should probably account for a few extra for that inevitable yolk that sits wrong when the egg is boiled, or the white that rips…)

Making easily peel-able eggs can be tricky, and of course the primary time you want your eggs to look perfect is when you are making deviled eggs. But in general, there is an easy science trick to facilitate peeling eggs: add baking soda to the water. This increases the pH (makes it more alkaline) of the water which helps separate the inner membrane from the shell (i.e. keeps the albumin in the egg white adhered to itself). Check out Gnarly Science for a more thorough discussion of the science behind all this.

Don’t however make the mistake H did while trying to use this trick and add baking powder. Baking powder contains tartaric acid as well as the sodium bicarbonate of baking soda, which is a great boon in baking because you don’t need to add other acids to activate the CO2 formation, but having that acid there while you are trying to increase the pH rather cancels out the effect. He was rather put out that I was laughing at him until I pointed out that baking powder contains its own acid. He knows the science, but not the cooking. 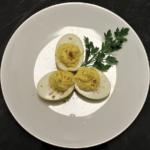 At least one day before you are going to want them, start the eggs pickling/marinating

The day of consumption

*I’m including how to hard-boil an egg well because I know it can elude some people *cough*H*cough*:
Heat a pot of water at least 3 inches deep until boiling. Using a large spoon, add the eggs into the water quickly (straight from the fridge). Add 1 tsp of baking soda per quart of water. Boil for 10 minutes. Immediately submerge in cold water. Change water as it warms. Adapted from Blind Tiger